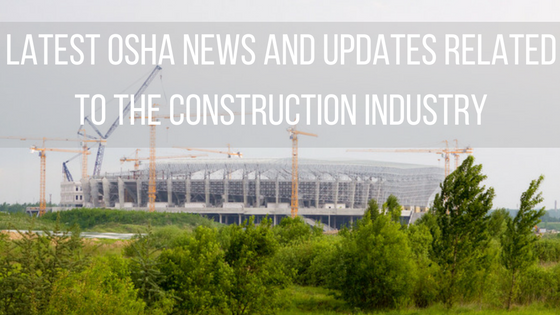 The construction industry remains under the close organizational watch of OSHA, which frowns upon lax treatment of its rules. Fines and citations were issued over the past month, while new directives and agreements were forged. Listed below are some important updates that are relevant to the industry:

In Austin, Texas, the issue of safety in the workplace and the rights of immigrant workers can sometimes be clouded by language barriers. In order to limit such problems, an agreement between OSHA and the Workers Defense Project has been in place since 2010. That agreement was renewed for two more years on August 30.

On September 1, the organization’s Corpus Christi office also signed a similar agreement with Mexican consulates in Laredo and Brownsville, Texas. Spanish-speaking personnel will be used to emphasize greater awareness of falls and situations where a worker is caught in or between a hazard. In addition, knowing how to avoid being struck by construction vehicles and avoiding the prospect of electrocution will also be covered.

Five days later, the organization proposed the following fines for companies working on an Austin, Texas excavation: Austin Constructors, $113,486, and Muniz Concrete and Contracting, $7,857. A total of five violations were noted, one willful and four of them serious, for creating hazards in regard to trenching and exposing workers to cave-in hazards.

The willful violation stemmed from the lack of protection for those within the trench. Austin Constructors’ three serious violations were connected to the failure to put guardrails on the walkways near the trench, exposing employees to loose soil or rock and not supporting or covering utility lines in the trench. Muniz was cited for the cave-in exposure hazard.

Casey Perkins, the organization’s area director, noted that their inspection came before any serious injuries or deaths had taken place. Perkins specifically cited the August 31 tragedy in Lockhart, Texas, in which a residential wastewater tunnel being dug collapsed, as an example of the type of tragedy that can result from failure to address such issues.

The Dangers with Falls

On September 14, an investigation determined that a New Jersey company had willfully ignored a complaint related to not providing equipment for fall protection. A total of 14 serious violations connected to machinery being unguarded, scaffolding concerns and electrical issues were noted, as was an other-than-serious violation concerning records maintenance. The proposed fine, in this case, was $193,053.

OSHA made a particular point to note that the company was tempting fate when it came to the industry’s leading cause of death, falls. The project involved a conversion of a commercial building with multiple stories into residential units.

An agreement between the organization and Turner Construction in Northlake, Illinois, was reached on September 22. Working together, the two groups will seek to make all workers on the CH2 Data Center project aware of possible dangers. In addition to training the workers to avoid the most common injuries, those employing workers, the contractors and sub-contractors will document on a daily basis all safety aspects.

The organization will then review the results on an annual basis. Those daily duties will involve plotting out each task, meeting regularly with workers to discuss safety concerns and conducting regular inspections.